If you have been keeping up with my Netflix habit, you know that I am currently watching Supernatural. It started because my niece has been after me to watch it.  Since I would do anything for her, I agreed – on the condition that she watch Parenthood with my sister.  Happily, they are complying and so am I.

By the way, it is now 12:08 am, the cats are hanging out next to the computer, the dog is laying on the couch watching Supernatural, and I am sitting at the computer instead of getting much needed sleep.

At first, I watched because I promised. Much to my surprise, I am liking the show.  And like my urge to count orange and yellow cars when I take a long road trip, I am starting to pay attention to the references to other shows.  I am thinking about keeping a list so I can discuss it with my niece. Tonight, Season 3 episode 15, a nod to Dr. Quinn, Medicine Woman:

This is not the first reference to other shows that I noticed, just the one that made me want to comment.

I wish he would have said, same bat time- same bat channel– but I wasn’t asked to write the episode.

Before this, there was the I Dream of Jeanie- Bewitched comment, which quite frankly, was the turning point for me, the point where I knew I was going to finish watching this series even though Scandal Season 5 is now available and I haven’t even finished House of Cards yet.

Sam: I don’t know. I guess they’re powerful enough. But not exactly like Barbara Eden in harem pants. I mean, Djinn have been feeding off people for centuries. They’re all over the Quran.

Dean: My God. Barbara Eden was hot, wasn’t she? Way hotter than that Bewitched chick.

When I was growing up I never could decide if I would rather be Jeannie or Samantha Stevens. They both had their advantages.  Of course at the time I also wanted to be Laurie Partridge.  It was a very confusing time.

I wish I hadn’t slept through some of the episodes because I probably missed quite a bit of TV and movie references.  Meanwhile I am trying to figure out which characters I really like and trying to figure out of Sam really is as cool as I think he is…and thinking about going to sleep at some point before I have to wake up again.

If you have any favorite Supernatural quotes, let me know.

My daughter received a kidney transplant in 12/2015. She is now 12 years old and she was on dialysis for 8 years prior to receiving her transplant. She has other health issues, besides her kidney disease and it was a combination of reasons that she needed to wait that many years for a transplant. We […]

via BK Virus and Kidney Transplants — Have I told you about the time?

I wore a really pretty dress to work today. It is kind of vintage looking, so I put on my awesome mother-of-pearl clip earrings. I felt a bit like my beautiful grandma, may she rest in peace. Someone said I looked nice, nicer than I have in a long time. It didn’t make me happy. I cried.

When you finally decide to lose weight, it is a hard journey. Lots of ups and downs and insecurities. Knowing how I look to the world is so different than how I feel inside.

I understand why people want a quick fix. But that just derails the process of finding health and learning that food is a fuel, not a crutch. I am staying the course, not giving up. Like everyone else on this journey, some days we just have to be reminded that there is gold at the end of the rainbow.

It was a black film canister, rattling around the bottom of an old Naturalizer shoebox labeled “photos.” I opened it, wondering if it was a roll of unused film. Instead, I found a twist of white tissue paper wrapped around tightly rolled black-and-white negatives. I held them up to the light. At first I saw…legs.

Then, people with bicycles.

Wait, that looks like the Monument to the People’s Heroes. Is that Tiananmen Square? With banners? 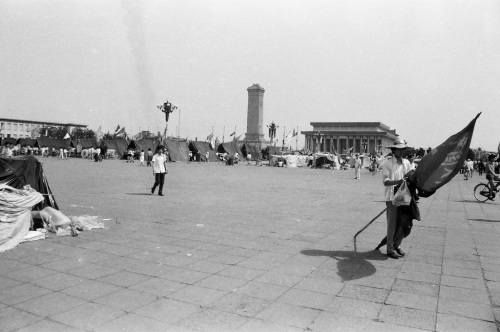 Next, a white form rising above a crowd, holding…a torch?

Oh man, is this what I think it is?

So my sister and my niece have been bugging me to watch Supernatural for quite a while. I did watch parts of the first episode about five times, but never thought it worthy of my precious viewing time.  That is until I came up with a plan:

Let’s just be clear, neither of them has kept up with the bargain. In fact, I have inside information that they are currently watching General Hospital.

Nevertheless, I am plugging away with my part of the deal, good guy that I am. Yet, even this early in Season One, I have issues.

Finally, after complaining about the show for so long, I find it hard to believe that it is now 1:00 in the morning, I need to get up for work at 5:30, and I am currently watching Season One, Episode 13.  I will probably fall asleep before the end and have to watch it again, but somehow that doesn’t seem so bad.

I am looking forward to discussing Parenthood with my sister and my niece. After that, they can watch Charmed so that we can all cry about the final episode together. That, my friends, was viewing perfection.

Drop me a line and let me know what you are currently binge watching. It’s kind of fun, isn’t it?